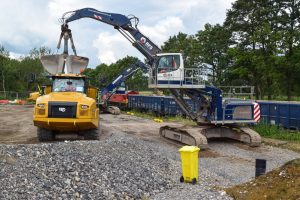 HS2 has opened a new rail freight facility near Calvert which will help the high-speed rail project continue to deliver construction material by rail to the biggest Buckinghamshire site without putting extra lorries on the roads.

The new railhead, the second to be built at Calvert, will allow HS2 to run an extra 150 aggregate trains over the next 2 months, saving 8,300 tonnes of carbon and taking the equivalent of 24,000 trucks off the roads.

Once work is complete, HS2 will pass by Calvert in a 4 km long cutting roughly following the route of the disused Great Central Railway, with a spur off to a new infrastructure maintenance depot from which engineers will repair and maintain the new line. This depot will be situated alongside the new East-West Rail line which is currently being reopened in stages between Oxford, Milton Keynes, Bedford and Cambridge. Closed in the 1960s, the reopened East-West Rail line will cross HS2 just north of Calvert.

In order to reduce overall disruption for local residents and boost efficiency, HS2 are also delivering 3 km of earthworks for East-West Rail where it crosses HS2 including a spur to allow a potential East-West Rail extension to Aylesbury.

Already 369 freight trains have arrived at the first rail freight facility in Calvert and by the end of the year more than 840,000 tonnes of construction materials will have been delivered. This will be equivalent with 84,000 trucks removed from the roads and saving 29,000 tonnes of carbon.

The construction is being managed by HS2’s main works contractor EKFB, made up of Eiffage, Kier, Ferrovial and Bam Nuttall. EKFB are delivering the 80 km central section of the route, including 17 viaducts, 81 bridges and three ‘green tunnels’ and are set to create 4,000 jobs over the next two years. The trains are operated by DB Cargo and Hanson.