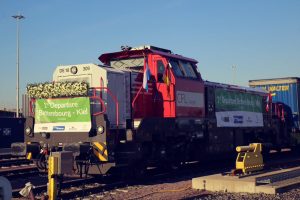 LKW Walter, Stena Line, a ferry operator, Port of Kiel and CFL multimodal have launched a new rail connection between the intermodal terminal Bettembourg – Dudelange in Luxembourg and the terrminal Schwedenkai at the Port of Kiel.

As the four companies agreed to expand their service offer, the new intermodal connection will run 3 roundtrips per week for cranable trailers and containers.

The new regular intermodal service is seen as a stimulus for the development of European intermodal market. The regular service connects the Luxembourg area as well as the existing trains from Lyon, Le Boulou and Barcelona, to the Port of Kiel and its ferry lines to Göteborg, in Sweden.

The new train service will foster modal shift, allowing the transfer from road to rail of up to 10,000 trucks and CO2 savings of about 11,000 tonnes per year.