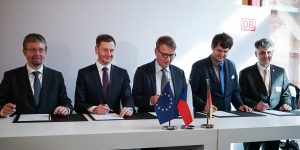 The representatives of Czech and German Transport Ministries, the Czech railway infrastructure manager, Správa železnic, and Deutsche Bahn signed an agreement on the construction of the high-speed railway line linking Dresden and Prague.

The new connection will reduce the travel time between the two cities to one hour, moving the freight railway traffic from exposed Elbe valley, which is “a significant challenge for both states. All stakeholders realise that the new high-speed line between the cities of Saxony and the Czech Republic is a very important infrastructure project. The signature of the joint statement confirms our efforts to continue intensive cooperation in planning its construction,” said Jiří Svoboda, Director General of the Správa železnic, the Czech railway infrastructure manager.

Under the agreement, the involved parties will continue the close cooperation during further planning of the line with the intensive involvement of the European Grouping for Territorial Cooperation (EGTC). All parties are expecting that the state budgets will have the required funding to ensure all planning activities.

“Saxony needs a modern cross-border rail infrastructure which will improve the international long-distance transport connection. The new Dresden–Prague railway line is of fundamental importance for the Free State of Saxony. Our goal is to reduce the noise level and relieve freight traffic in the Elbe Valley. Together with the federal government, DB and the Czech Republic, Saxony will continue to prepare the project,” said Prime Minister of Saxony, Michael Kretschmer.

The signatories of the document also welcomed the fact that this year negotiations began between the Germany and the Czech Republic, which deals with the construction of the planned cross-border tunnel in the Ore Mountains (Krušné tunnel).

This is “another example for strengthening the role of railways in Europe. We have launched an ambitious future project. A fast link will create new opportunities for business science and culture and promote environmentally friendly mobility,” said Ronald Pofalla, DB Board Member for Infrastructure.

In addition, at the end of 2019, Správa železnic, DB Netz AG and DB Energie GmbH concluded an agreement on cooperation for the construction of the Dresden – Prague railway line.

As a next step, an international treaty is expected to be drawn up which will be ratified by the Presidents of both countries.

A key component of Prague – Dresden HSR line, crossing Ústí nad Labem, is the construction of the 26 km Krušné cross-border tunnel, which will allow the transfer of the long-distance passenger and freight transport from the Labe Valley. On German side, the tunnel will have a length of 15 km, while in Czech Republic, 11.4 km. In 2018, it was announced that Deutsche Bahn will be responsible for the design the Krušné tunnel.

According to a study, the alignment of the new railway link will be deviated from the existing line on Dresden – Ústi nad Labem – Prague axis in Heidenau (south of Dresden), entering the 1-km long Heidenau tunnel and then crossing Seidewitz viaduct (1.040 m).

A complex evaluation of the first phase recommended changing the route of the new line RS4 between Prague and Dresden so that the city of Ústí nad Labem may be serviced on the line as a new main passenger station is going to be built there for trains from all directions. In the second phase of the study, partial sub-variants of this notion are being verified and evaluated. There are several dozens of technical and operational modifications under verification, both a design of new short connecting lines, alternatives for passing the river Labe in Ústí nad Labem and introducing new lines for passenger transport.

The new Prague – Dresden HSR will increase traffic capacity allowing trains to run at speeds of 230 km/h, reducing the travel time from 2 hours to 60 minutes cutting the distance between Dresden and Prague by 56 km.

The line is a part of the Trans-European transport network TEN-T, more specifically the Eastern-Mediterranean Corridor which connects the North and Baltic Sea with the Mediterranean and Black Sea. The construction will also connect the Czech Republic to the network of high-speed lines in Western Europe.