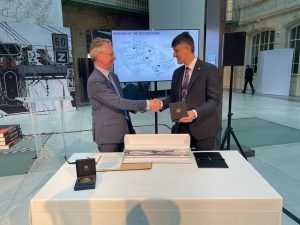 Správa železnic (SŽ), the Czech rail infrastructure manager and SNCF Réseau signed a new cooperation agreement of the preparation of the high-speed rail network (VRT). Under the agreement, the French company will provide consultation for the next 8 years.

The two companies are already cooperating for the implementation of the projects for which “the SNCF has shortened the preparation of high-speed lines in the Czech Republic by several years,” SŽ says.

The main reason is the use of French know-how, which is based on more than 50 years of experience in the design and operation of its high-speed network. The new contract, the drawdown of which may not exceed EUR 8.5 million, will allow this cooperation to continue and develop.

“If we want to adhere to the current work schedule and start construction of the first VRT [high-speed rail] sections in 2025, we need quality experts with experience in preparing and operating such lines,” Jiří Svoboda, the Director General of SŽ said at the signing ceremony.

SNCF Réseau will provide consulting services for the next preparation stages and will cooperate in the field of documentation process for zoning decisions or creating internal regulations of SŽ for the operation of the high-speed network. The contract also presupposes regular communication and supervision during the construction of the lines, their commissioning, maintenance and inspection. The involvement of experts who have extensive experience in the design and operation of this technically advanced system will minimise the risk of errors, the correction of which could increase the cost of project implementation.

This new agreement is based on two previous ones signed in 2020 for construction preparation stage and in 2019 for the development of the design documentation.

The Czech high-speed rail plans cover the construction of a network in South Moravia, in the Elbe and the area of the so-called Moravian Gate. Czechia is currently in the pre-investment phase and the first pilot sections are expected to be constructed from 2025.