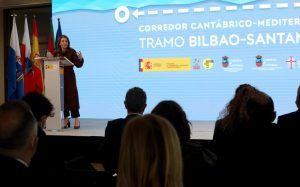 The meeting was attended by the President of Cantabria, Miguel Ángel Revilla, the Government delegate in Cantabria, Ainhoa Quiñones, the president of Adif, María Luisa Domínguez, and the General Secretary of Infrastructures of MITMA (the Ministry of Transport, Mobility and Urban Agenda), Xavier Flores

The minister unveiled the details of a feasibility study, and six alternatives were presented for a 100 km line which will ensure the connection between the two cities within 1 hour. The project includes a final 20 km section south of Bilbao to reach Abando, with two thirds to be built in tunnels and viaducts with estimated costs of EUR 26-29 million per km.

All the six alternatives include the rail connection from Santander on the exiting line to Palencia, towards the southern railway variant of Bilbao. On April 2, 2022, Adif has approved a EUR 46.68 million contract for track duplication works on Renedo-Guarnizo conventional section between Palencia and Santander and other actions on the C-1 line (Torrelavega – Renedo section) on the Cantabria Cercanías system. The project will increase the capacity on the currently Palencia – Santander single track line and will also contribute to the future link between Santander and Bilbao.

The new line will be essential as the two cities are currently connected by a metre-gauge branch line partially electrified and the travel time takes 3 hours.

The next steps of the project involve the elaboration of an informative study which will delve into the most viable alternatives to submit them to public consultation and subsequent environmental evaluation.

The Santander – Bilbao railway line is situated on the Mediterranean Corridor and would be implemented based on a high passenger demand expected to carry more than 2.4 million travelers per year and the freight services will become more attractive with a potential of 20 million tonnes per year. The new connection will also improve the Cercanías traffic in Cantabria and soon the Ministry will resume the duplication of the track between Muriedas and Santander and the section between Guarnizo and Renedo.  This new rail line will ensure the modal shift to railway transport as it will become a competitive alternative to the A-8 motorway, thus reducing the level of emissions.

The minister has discussed with the president of Cantabria which is in the favour of the project which would benefit financial support from the National Recovery and Resilience Plan (PRTR). Cantabria will receive EUR 186 million from PRTR of which 60% will be managed by the regional and local authorities and are intended for sustainable and digital rehabilitation of buildings as well as for the decarbonisation of mobility sector. This includes a unified public transport payment system, cycling routes ensuring active mobility between five towns, bicycles park facilities at bus stations in five towns, including Santander, electric recharging points in the bus stations, as well as the implementation of projects and measures to promote train-bicycle intermodality.