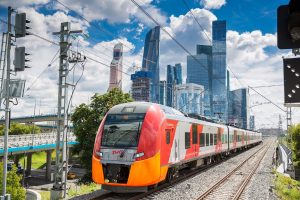 On the Moscow Central Circle (the MCC), 633 million passengers travelled since its opening, 5 years ago, with a record daily passenger number of 582,000 in December 2019.

The network is constantly developing and in May 2021, the Vostochny station was opened. It is a part of a large and unique hub which unites Cherkizovskaya station Sokolniki metro line, Locomotive station of the MCC and surface transport. Low platform is for Strizh trains, produced by Talgo and high one for Lastochka trains of Desiro model created by Siemens Mobility. The purpose of the Vostochny station construction was to unload the busiest part of Moscow,  Kurskaya-Kalanchevskaya.

In the upcoming years, the opening of the additional lobbies at 7 almost fully loaded stations of the MCC is planned. The integration of the MCC with the railway line, which runs from the Moscow Kievsky Railway Terminal, is planned to be completed in 2022 by connecting the two directions of the future MCD line (D4). It will also be integrated with prospective metro lines, the Troitskaya Line 16 and Birulyovskaya.

The MCC was launched in 2016 and have a total length of 54 km served by 31 stations, and 26 metro interchanges.

“Right now, we continue to improve the Circle’s infrastructure. We build additional entrances in places where passenger traffic has increased and install escalators by extending the stairway where it is appropriate. We will continue the Moscow Central Circle integration into the Moscow Metro lines and into the Moscow Central Diameters,  Maksim Liksutov, the Deputy Mayor of Moscow for Transport said.

The passenger traffic at the MCC and the MCD not only recovered from the pandemic but has also increased since 2019. In the first half of 2021, the MCC had 71 million passengers. A total of 242 pairs of Lastochka trains on weekdays and 211 pairs on weekends run on the MCC day. The capacity of the Lastochka train is 1.500 passengers. At peak hours an electric train runs every 4 minutes and at non-peak hours, every 8 minutes.

51 Lastochka trains, which were originally used in interregional routes are operating the MCC network and they are now improved with a modified urbanised interior and provide a combination of two seats on each side of the train. Multimedia navigation was installed in trains and special places have been created for low-mobility passengers and for bicycles. The trains are also equipped with a climate control system, that makes trips more comfortable in any season. In addition, headways were reduced from 6 minutes to 4 in peak hours and from 12 minutes to 8 in other times of the day. Thanks to such schedule, the artery’s transport ability has increased by 36%.

Currently, an autonomous train, which in the future may operate on the MCC, is tested on the experimental circle in Scherbinka.

In addition, a double-decker Stadler Kiss train has been operating during the two weeks on the MCC. The purpose of the test-drive was to check if it is possible to create additional passenger seats and unload the Circle.

The MCC has improved transport accessibility for the 34 Moscow districts with over 3 million population, giving citizens the opportunity to create hundreds of alternative routes.

The Moscow Central Circle is integrated into the existing public transport system, creating seamless interchanges between metro, the MCD and suburban railways. The Troika card, which will become virtual soon, is valid for the MCC, as it is for all public transport modes in Moscow. Passengers can also pay with Apple Pay, Samsung Pay, Google Pay, Mir Pay and other payment options. This system is unique, as it selects the most advantageous fare, based on how often, in which zones and which transport a passenger uses. Now the Face Pay system is under development, and soon it will operate for the MCC, the MCD and surface transport.