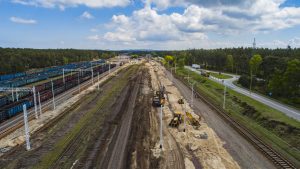 Rail access improvement project at the Port of Szczecin passed its halfway point as the Polish infrastructure manager PKP PLK has competed the construction of 37 km of electrified tracks and 100 turnouts. New tracks and the traction network are also being installed at Świnoujście port.

37 of the planned 61 km of new tracks have already been laid at Szczecin Central Port station and 98 out of 177 turnouts were installed. To allow heavier freight trains, the contractor strengthens the ground and drains the tracks. Support structures for the new overhead line are also being installed.

The installed traffic control devices will increase safety and the infrastructure on the island of Ostrów Grabowski at Szczecin port, which is managed by ZMPSiŚ. Efficient and safe transport of goods to the port will be ensured by the reconstruction of three viaducts and a railway bridge over the Parnica River.

In addition, works are carried out at port of Świnoujście for passenger transport, as will gain improved access at Świnoujście Warszów stop. Sheds, benches, lighting, and signage will be installed on the platform. A second track which will be electrified is being built between the Świnoujście Przytór station and the Świnoujście station. 34 turnouts were installed to improve the line’s capacity and allow more trains. At the Świnoujście freight station, about 9 km of new tracks and the traction network are replaced. The railway infrastructure in the vicinity of the port of Świnoujście is also being rebuilt.

Under the project, in the area of the Lubiewo station (in Świnoujście) between Lubiewo and Warnowo, the contractor strengthens the area for the tracks, while at the Euroterminal area, new tracks are already being laid. 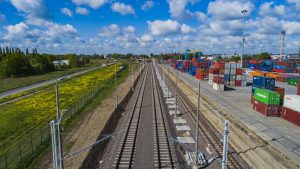 “Within the European Year of Rail, I welcome the progress of work, despite the COVID-19 pandemic, in the ports of Szczecin and Świnoujście. It is an important and strategic project co-financed by the CEF in the amount of almost EUR 120 million. Thanks to the investment, rail access to ports will be improved, which means that more goods will be transported to and from ports by green transport, which is rail,” Morten Jensen, the Acting Head of Unit at CINEA said.

As part of the rail access improvement project, nearly 100 km of tracks of which 61 km at Szczecin port and 35 km at Świnoujście and 84 km of traction network will be modernized. 285 turnouts will be replaced, of which 177 in Szczecin and 108 in Świnoujście. The level of safety will be increased by the installation of modern railway traffic control devices and the reconstruction of 12 rail-road crossings in Szczecin and 10 in Świnoujście. In Szczecin, the bridge over the Parnica River and 3 railway viaducts will be rebuilt. Completion of works is planned for mid-2022.

“The projects carried out at the ports of Szczecin and Świnoujście are important on a national and international level. Investments increase the role of railways as efficient, safe, and environmentally friendly transport of goods and will bring measurable effects for the economy. PLK’s activities are in line with the European Green Deal objectives,” Arnold Bresch, member of the Management Board of PKP Polskie Linie Kolejowe said.

The work on the access tracks to the two ports is carried out in stages to ensure access by rail to the quays. The investment will provide access to the ports of longer and heavier trains. There will be 750-meter trains with a load of 221 kN per axle and the freight warehouses will be handled faster and more efficiently. The reloading capacity of the stations in Szczecin and Świnoujście will also increase and the ports will accept more cargo, which will improve the competitiveness of freight transport and the potential of ports. This will positively affect the economic development of the region.

The entire project has a total value of PLN 1.5 billion (EUR 334.6 million), of which PLN 510 million (EUR 113.78 million) is the European financing from the Connecting Europe Facility.

PKP Polish Railway Lines is also carrying out the improvement of the rail access at Gdynia and Gdańsk ports.