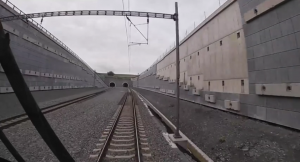 The Czech rail infrastructure manager, Správa železnic (SZ), has started the trial runs at a speed of 200 km/h in the Ejpovice rail tunnel between Pilsen and Rokycany. The main purpose of the tests was to gain practical knowledge about the behaviour of the traction power supply system on a long single-track tunnel at this speed.

The test runs were preceded by measurements by diagnostic means of Správa železnic and a technical-safety test was performed, which confirmed the suitability of the relevant line section for run at 200 km/h.

The trial runs were carried out with an ÖBB measuring unit consisting of two locomotives of Taurus series, equipped with a measuring pantograph, between which a car for traction line diagnostics was placed.

The Ejpovice rail tunnel was built by force of a tunnel-boring machine with a smaller diameter, a fixed track was made in its tubes. In such environment where the train set is a piston, the overhead line equipment behaves differently than in a double-track tunnel or on a plain line. Seeing that the method of construction of the tunnel proved to be highly effective, its use by designing and construction of new railway tunnels is presumed.

“The measuring unit reached the speed of 200 km/h in four runs, exactly as planned. We will further analyse the diagnostic data obtained during the test runs and use them for the optimal design of overhead line equipment structures when introducing higher speeds on the lines of Správa železnic,” Jiří Svoboda, the Director General of Správa železnic said.

Currently, 207 km of various line sections are being prepared, on which speeds of up to 200 km/h could be driven in the future.

These include, in particular, the 15.5-km-long section between Choceň and Uhersko, where it should be possible to allow trains to run at a speed of 200 km/h starting mid-2025.  There are also 17 km of line between Sudoměřice u Tábora and Votice and an 8-km-long section between Soběslav and Doubí that will both allow trains to operate at a speeds of 200 km/h from the beginning of 2026.

Part of the new line between Pilsen and Domažlice is being designed for the speed of 200 km/h. The trains on the new-constructed line between Brno and Přerov or between Nemanice and Ševětín will reach the same speed. Správa železnic is also preparing adjustments for the necessary speed increase on the Břeclav – Šakvice line, where trial runs took place this year.