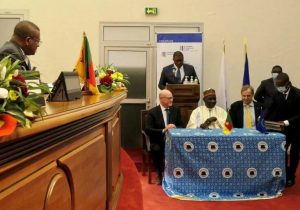 Under the agreement, the European Union will provide a EUR 17.1 million grant while the European Investment Bank will deliver a EUR 106 million loan, following the announcement in December 2020.

The project is benefiting from technical support from the European Union to help project implementation and share international best practice.

The Belabo – Ngaoundere renewal project is expected to be backed by financing from the  Cameroon Government and the French development agency AFD.

“Upgrading Cameroon’s national transport network is crucial to improve lives and create new opportunities for our people. I welcome the European Investment Bank’s support for the Belabo – Ngaoundere railway. The EIB’s largest ever investment in Cameroon is a flagship of sustainable transport for our country and for Africa.” the Prime Minister said.

The financing will support the implementation of the EUR 243 million project which will enable faster and more reliable freight and passenger rail transport between central and northern Cameroon, enhance connections between the port of Douala, Chad and the Central African Republic and provide a sustainable alternative to road transport.

The agreement is a “a decisive step in the renewal programme for the entire operational rail network, initiated at the end of the 1990s. With the PRBN [Bélabo-Ngaoundéré line renewal project], we will have 330 additional km of railway track renewed, approximately 30% of the national network,” the Minister of Transport said at the signing ceremony.

The upgrade works are expected to be completed in 2028 when more than 1 million passenger a year will benefit from improved transport service. The project will stimulate the economic growth and create jobs along the route and in northern Cameroon.