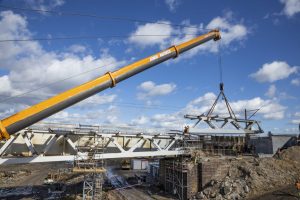 By 2022, Polish railway infrastructure manager, PKP PLK, will rebuild 100 bridges and viaducts on Poznań-Szczecin line which will allow increased train speed and the level of safety.

The project on E59 railway line works, Poznań Główny – Szczecin Dąbie section is one of the largest investments under the National Railway Programme. The works planned to be completed by the end of 2022 worth PLN 4 billion (EUR 874.56 million) and have a PLN 2 billion (EUR 437.3 million) co-financing from the Connecting Europe Facility.

95 bridges and viaducts on Poznań-Szczecin will be constructed on 187 km modernised railway route, including Warta, Noteć and Drawa. The project also includes road construction, sidewalks and bicycle paths in Mokrz, Miałów, Drawski Młyn, Drawin and Mierzęcin.

In Wielkopolska, Greater Poland Voivodeship, advanced works are performed in Wronki poland, where a 193-m bridge is constructed in stages.

In West Pomerania, modernisation works are carried out on the road viaduct in Stargard. A new railway structure will be built in its place, with two lanes underneath, pavements and bicycle paths. Stairs and elevators leading from the viaduct directly to the platforms will facilitate access to trains. Currently, the contractor is changing the course of underground installations, including power cables that were discovered during the works.

On the modernised line from Wielkopolska to Szczecin, the tracks and contact line are changed while modern platforms are being built for passengers. In Poznań Wola, Kiekrz, Pamiątkowo and Baborówko the platforms are already used by passengers and in eight locations new platforms and information systems will be installed.

The trains are running on a newly equipped track with traction network and control devices on three sections (Poznań – Kiekrz, Rokietnica – Szamotuły, Pęckowo – Wronki). An adjacent track is being prepared to be constructed. At the same time, works are progressing between Słonice and Choszczno, Dolice and Kolin, Reptov and Szczecin Dąbie. Also, on the section Dobiegniew – Bierzwnik and at the Drawski Młyn station before the assembly of new ones, old rails, sleepers and overhead contact line are dismantled. The progress of work on all sections of the railway line includes the timetable.

The project on the reconstruction of bridges and viaducts on Poznań-Szczecin line will increase train speed to 160 km/h, reducing the travel time by about 50 minutes. Travel comfort and safety will als increase thanks to the new tracks, a modern control system, rail-road crossings modernisation and the construction of two new local control centers in Poznań and Stargard.